Almost exactly one week until we leave. I think we’re both pretty eager to just go now, get settled into our new home and start having some adventures. You can tell we’re getting close to the moving date because gradually our flat is getting more and more empty by the second.

I have actually already done 2 trial packs (that sounds really annoying and over-organised) but it is for no other reason than I need to know the exact number of dresses and shoes I can take with me. As someone with over 100 dresses and over 20 pairs of shoes – downsizing to a single suitcase (albiet a big one) hasn’t been easy. Some have gone into storage. Some have gone to new homes. Some have gone in the bin. Yes there have been tears.

In fact – Aside from securing Visas and securing the house – it’s been the most-hard bit about the whole trip. So far.

At the beginning the whole suitcase situation looked like this actually…

So needless to say, I have made a vast improvement. We’re only a little bit overflowing now. If all else fails I will just cram stuff into Pad’s suitcase since he has a bizarrely small amount of possessions. All his possessions are Apple. Which I guess limits him somewhat to choice. Quality over Quantity they say?

Aside from packing – there are three other hugely important girl-travel-decisions that need to be made.

1. What do I wear on the plane? I need a comfy mix of “nice dress and civilised person” but also “comfy sleeping gear and practical for a completely different climate upon arrival”. This is (and always will be) one of the biggest, most annoying choices I ever make. I hate dressing for flights. I wish I could just rock up in duvet and sleep, but it is never this easy. Nothing ever is with planes. 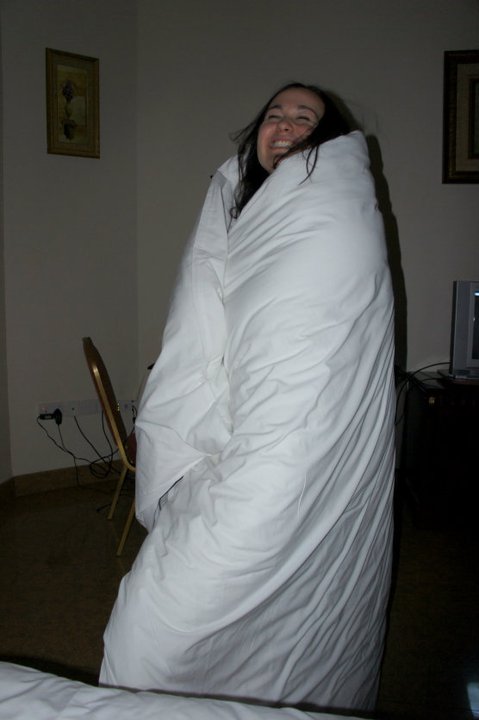 This is the dream.

2. What TV show do I choose for the plane? I made a huge mistake earlier in the month. I downloaded the entire series of American Horror Story and watched it all in the space of a weekend. I am hugely picky with TV shows – and the fact that this one got me so hooked that I watch all the first series in 3 days – should have been a clear sign of “SAVE IT FOR THE PLANE RIDE ELLIE”. But I didn’t listen to my inner sensible brain, and now I am stuck with nothing to watch. I was considering Game of Thrones (after both Eve and Ronan both recommended it) but for some reason it is not available on iTunes. Which is very frustrating. Paddy’s boss Will recommended The West Wing to me last week – which I am now going to look into. But these are tough times. What if The West Wing isn’t on iTunes either!?

Suggestions would be welcomed. Please!

3. What music do I download on the plane? This is not so much a problem, just a general wondering and something I need to get done. I am thinking lots of Taylor Swift. I am also thinking the Inception Soundtrack and maybe the Dark Knight Rises Soundtrack. Maybe also the Titanic Soundtrack. And some Disney. That seems about right. I really like Soundtracks.

Aside from this. I think we’re all good.

Oh, and I hope there is snow on the mountains when we arrive because I want to do some skiing before it all melts.

The Beautiful Padlock Bridge in Paris

What I’m looking forward to in Queenstown