Singapore is hands down one of my favourite cities, and one of the most memorable nights we had there was in the huge casino on Marina Bay. To describe this casino as ‘nice’ would be an understatement, as we’re discussing the largest, most lavish and most exclusive casino in the world. And when we’re talking of Marina Bay Casino in Singapore that is not an overstatement. The only other casinos I’ve visited have been in Las Vegas (you can read about Las Vegas in my Vegas blog posts) and Singapore definitely matches up to the Vegas glitz and glam. 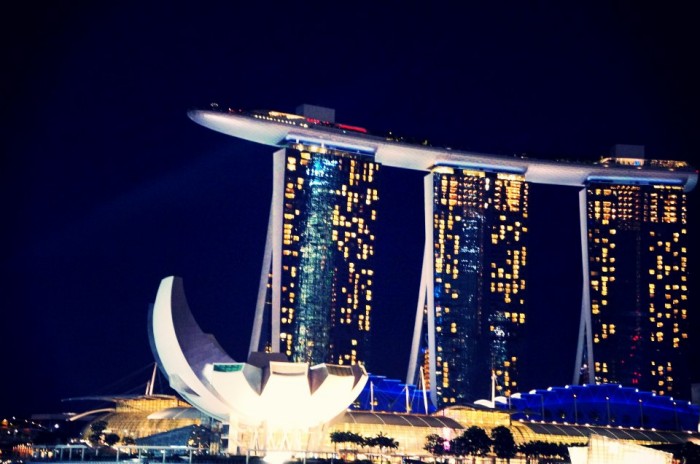 So what makes Singapore’s epic casino so special?

Marina Bay is owned by Sands Casino Corporation, a company that owns several of exclusive casinos in some of the most luxurious gaming destinations in the world. Sands Casino also owns The Venetian and the Palazzo in Vegas, The Venetian Macao, Sands Macao and two other casinos in Macao, as well as Sands Bethlehem in Pennsylvania. Marina Bay Sands is one of the most magnificent buildings in the world, with more than 15,000 square metres of gaming space, with 600 tables and over 1,500 slot machines. The resort itself is located on the Marina Bay in Singapore. The whole resort was rated the most expensive casino resort in the world and it was estimated that the complex is worth a total of 8 million Singaporean dollars.

Marina Bay is more than just a casino, the resorts also has a large hotel with over 2,500 rooms and a massive exhibition centre, a mall which is 93,000 square metres large, two theatres, a museum, Sky Park, a large swimming pool and several other attractions. The Shoppes (mall) sells some of the most prestigious brands in the world such as Chanel, Cartier, Ralph Lauren, Gucci, Armani, Prada, Saint Lauren Paris and many more. The resort was designed by Moshe Safdie, one of the most famous architects in the world, who received a Gold Medal from the American Institute of Architects. Marina Bay was opened in February 2011. It’s literally an entire day out – and you wouldn’t even need to leave the resort. The hotel is so spectacular – Pad and I have it on our bucket-list to stay there one day.

Foreigners are not required to pay a levy and are allowed to enter the casino for free. Citizens of Singapore, or permanent residents need to pay 100 Singaporean dollars for 24 hours, or 2,000 if they want an annual pass.  The casino is open 24/7 and the resort is located only 10 minutes from Changi International Airport.

With so many tables and slot machines it is obvious that there’s something for everyone. We mainly played on the roulette whilst we were there, but there are so many different games and tables, and it’s unlikely you’ll be queuing or waiting around for a spot.

Different ways to get from Singapore to Bali

My “Tourist” Photos From Singapore