For people traveling to Tibet for the first time, there is so much to see and do that it might be a little confusing where to start. However, your tour operators, who are experts in Tibet, can often help you to decide on your itinerary and what to see with their recommendations. But it is always a good idea to do a little research and find out a bit about where you might want to go before speaking to the experts at Tibet Vista to book your Tibet tour. 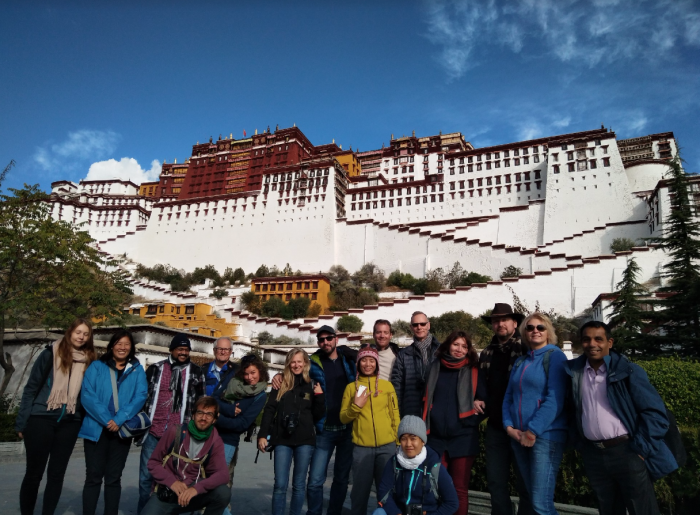 While Tibet has a gamut of places to go and things to see, there are a lot of things that you can do and places to visit just in Lhasa itself. An ancient city full of history and culture, it is the spiritual and cultural heart of Tibet, and is the place to go when visiting the region for the first time. with its majestic palace and sacred temples, several monasteries and more history than you could have hoped for on a first trip to any place, Lhasa is an ideal place to spend several days exploring the city and its unique people before venturing out into the rest of Tibet.

Some of the main attractions of Tibet can be found here in Lhasa, and can give you a unique insight into the land and the people that inhabit this third pole.

Barkhor Street, in Lhasa, is one of the oldest streets in the city, and is one of the most important, for several reasons. An area of narrow streets that encircle the famous Jokhang Temple, among other famous sites, it is the circumambulations circuit for pilgrims to Lhasa, where they perform the kora around Jokhang, the most sacred temple in Tibetan Buddhism. 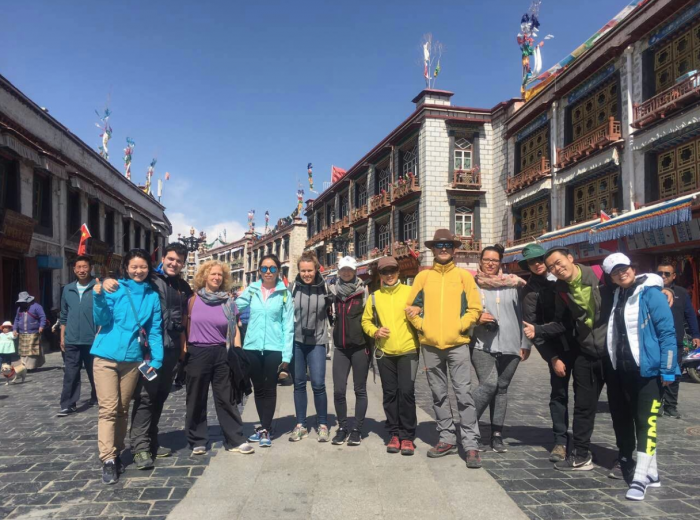 it is believed that after the temple was built in 647AD by the Tibetan King, Songtsen Gampo, it quickly attracted many pilgrims who came to view its magnificence. In true Buddhist tradition, the pilgrims walked a kora circuit around the old temple grounds, leaving behind a well-trodden path that is believed to be the origins of what is now Barkhor Street.

The kora route along Barkhor Street encompasses not only the Jokhang Temple, but also the Muru Nyingba Monastery, the former seat of the State Oracle of Tibet, as well as Tromzikhang and Jamkhang, and many other houses of Tibetan nobles. Four large incense burners sit at the four cardinal directions along the route, and burn constantly to please the gods that protect Jokhang temple.

Jokhang temple is the most sacred site in Tibet, and receives thousands of pilgrims to walk the circumambulation around Barkhor Street every year. At any time of the year, it is common to see Tibetan Buddhists walking around the kora, spinning their prayer wheels and chanting as they go, and  you can even see many people prostrating themselves on the ground as they make their way around the kora one body length at a time. Many of these pilgrims have walked for thousands of kilometers to get to Lhasa to perform this ritual, and it shows the utter devotion of Tibetans to their Buddhist faith.

Barkhor Street is also the biggest market in Tibet, and all around its circuit you can find shops and stalls selling traditional Tibetan goods made by local craftsmen in the traditional ways, as well as many other things that you would not expect to see for sale. A great place to go and look for trinkets to take home as souvenirs, you should be prepared to haggle over the price to get the best deal, as this is an integral part of Tibetan trading. Just try not to go too low on the price, or your vendor may feel insulted. If in doubt, your tour guide can help you with the haggling so you know when to stop and agree on the price.

Aside from the delights of Barkhor Street, there is the interior of the temple to take in, and it is really worth taking the time to step inside this sacred place to experience the wonders of Tibetan Buddhism at its most reverent. Maintained by the Gelug school of Tibetan Buddhism, the temple is said to have been built for the two brides of the Tibetan king, who are both said to have brought ancient Buddhist statues from their homes in China and Nepal. The statues still remain in the temple, and can be viewed by visitors, as can the huge number of Buddhist shrines that can be found inside, where devout Buddhists spend time praying and offering yak butter and tsampa to the gods.

Climb up to the majestic Potala Palace, visit murals, and see the former residence of the Dalai Lama

High up on Moburi, the Red Hill, overlooking Lhasa and set equidistant from Sera and Drepung Monasteries lies the famous Potala Palace. One of the most revered of all the Buddhist structures in Tibet, the palace was once the seat of Tibetan government and the home of the former Dalai Lamas. The site of the palace has been in use since the 7th century, when a small fortress was built on the hill by the Tibetan king, Songtsen Gampo, which was destroyed in the fall of the Tubo Empire. 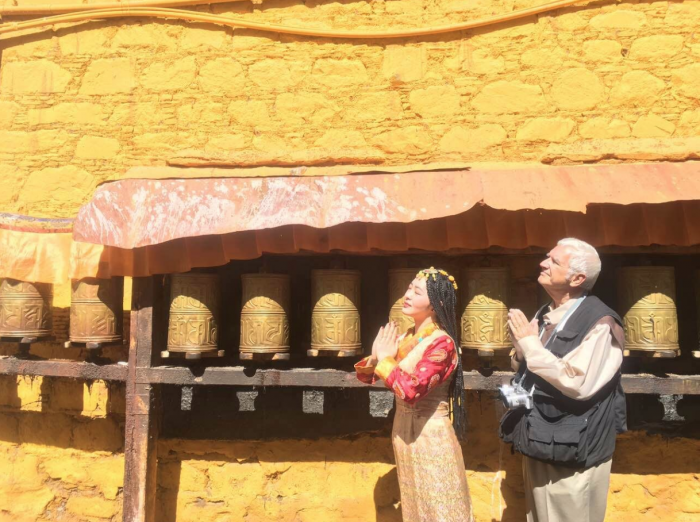 The current palace buildings were started in 1645 by the then 5th Dalai Lama, and the new Red and White Palaces became the center of politics and religion in the region. Named after the mythical home of the bodhisattva Avalokiteśvara, Mount Potalaka, the palace was actually designed in the form of a mountain in the far west of Tibet, which was discovered by monks sent out to find the perfect design for the new palace.

The palace is listed as the highest palace in the world, and is a treasure trove of Buddhist artifacts, paintings and murals, as well being an architectural wonder of its age. With walls some three meters thick and gilded roofs, the palace stands like a Buddhist beacon above the city, inviting all those who see it from afar to come and visit.

The Potala Palace contains many precious statues, including the two-meter high statue of tsong Khapa which sits in the East Chapel and the solid silver statue of Padmasambhava that resides permanently in the South Chapel. In the North Chapel you can find the statues of the various Dalai Lamas, the Medicine Buddha, and the statue of the Sakyamuni Buddha. The palace also houses many of the stupas that contain the relics of the former Dalai Lamas who were interred in the palace on their deaths.

Just as tea is the national drink of Tibet, so the Tibetans have their teahouses, and many of these can be found all over Lhasa. To Tibetans, tea is like coffee to Americans, and the first drink of the morning and the last drink of the day is usually tea, either yak butter tea or sweet Tibetan tea. To the people of Lhasa, a teahouse is not just a place to go and drink tea, but more of a place to meet and chat, to exchange the pleasantries of life, and debate about the meaning of life, or just to relax and take in the local flavors of the place. it is also known to be the center of news and gossip in the city, and if you want to know something, visit a teahouse.

Tea does not originate in Tibet, but was brought here in the 7th century from China, during the Tang dynasty. However, it was not made popular with the masses until around the 13th century, in the time of the Sakya Hierarchy and the ancient Phagmodrupa dynasty of Tibet. Since then, tea has become a predominant part of the Tibetan way of life, and is drunk throughout the day, either as sweet tea or the traditional Tibetan butter tea, or po cha.

Tea is so popular in Tibet, that almost every person has their own bowl, usually made of wood, for drinking tea, which is often kept inside their clothing ready to use. The teahouses, however, serve it in their own bowls and cups, so you do not have to worry about buying a bowl in order to drink tea, although it is a useful item to have in Tibet. Especially if you love tea as much as the Tibetans do. If you can, spend a little time relaxing in the teahouses after a days of touring the city, and you will find that you will be able to relax and rest more easily in this friendly and tranquil atmosphere.

Lhasa is the home of the most sacred temple in Tibetan Buddhism and the most beautiful palace in the region, so it should come as no surprise that it also houses the Great Three Monasteries of the Gelug School within its domain. Drepung, Sera, and Ganden monasteries are all within a short distance of the city of Lhasa, and are great places to visit whilst in Lhasa. One of four schools of Buddhism in Tibet, the Gelugpa is the largest and most dominant school of Tibetan Buddhism in the region, despite it being the most recent.

Seven kilometers to the north of the Potala Palace, at the foot of the nearby mountains, lies the first of three holy monasteries of the Gelug School of Tibetan Buddhism. The name Sera means “wild roses” in Tibetan, and is so named because of the wild roses that were growing on the hillside behind the monastery site when it was being built in around 1419. The monastery is also a Buddhist university, and one of three within the Gelug School. The monastery also includes around 19 hermitages and four nunneries which sit nearby in the foothills of northern Lhasa.

Across the city, and on the other side of the famous Lalu Wetlands, lies the second of the Great Three Monasteries, Drepung Monastery. Known as the “Rice Heap Monastery”, it lies at the foot of Mount Gephel, and is the largest of all the Tibetan monasteries. Sitting on the Gambo Utse Mountain around five kilometers from the center of Lhasa, the monastery once housed as many as ten thousand monks. The monastery was founded by one of the disciples of the great Tsongkhapa in 1416, and was the primary seat of the Gelug School. it was also the seat of the Dalai Lama until the construction of the Potala Palace by the 5th Dalai Lama.

Located a little way outside the city of Lhasa, in Dagzê County of Lhasa Prefecture, lies the Ganden Monastery, the third of the Great Three Monasteries. Founded by Tsongkhapa himself in 1409, the founder of the Gelug School of Tibetan Buddhism, it was the first monastery of the school, and the first Gelugpa University in Tibet. The monastery sits in a natural amphitheater, surrounded by rolling hills, and the kora route around the monastery gives dramatic views over the surrounding landscape. The name Ganden means “joyful” in Tibetan, and is the name of the heaven where the Maitreya Buddha, the “future Buddha” is said to reside, waiting for his time to come to earth and teach the pure Dharma.

Why Travelling in Style Doesn’t Have to Break the Bank