Top Things to Do during Your Lhasa City Tour

For many people, Lhasa is the center of Tibet, and as the capital city of the region, it is the administrative center of Tibet, as well as the spiritual heart of the Buddhist people and the beginning of the Tibet Tour. One of the highest cities in the world, Lhasa has been the capital of Tibet since the middle of the 17th century. 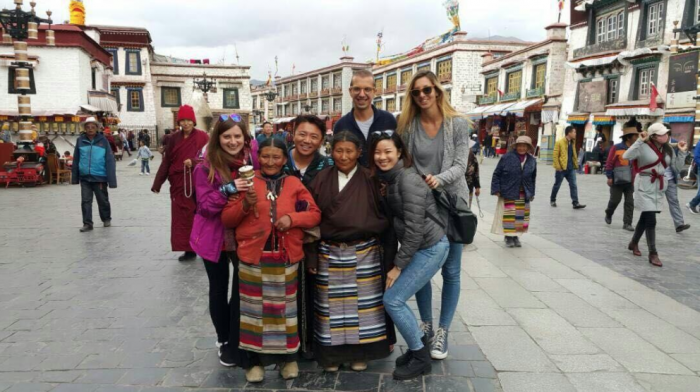 Literally meaning “Place of the Gods”, the city has been recorded as being called Lhasa since 822AD, and was previously known as Rasa, which meant “place surrounded by walls”. The city came into its own after the building of the Potala Palace and Jokhang Temple by the Tibetan King, Songtsen Gampo, who was converted to Buddhism by his first wife, Princess Bhrikuti of Nepal. The name was changed after the rise of the 5th Dalai Lama to power in the 17th century, when Lhasa was restored as the seat of Tibetan governance.

In modern-day Lhasa, the wide streets of the new Chinese city almost overwhelm the winding backstreets and narrow alleys of Lhasa Old Town, but in those small, ancient streets, the old culture of Tibet still shines through, and the fascinating old quarter of the city is a delightful place to visit.

A Visit to Potala Palace

Set up on Moburi, the hill overlooking the city of Lhasa, the Potala Palace is the ancient seat of power in Tibet, and one of the most historical buildings in the region. The fifth Dalai Lama, Ngawang Lobsang Gyatso, began building of the palace to its current design in 1645 after it was recognized that the site atop the hill was the ideal place for the seat of Tibetan government. However, it was not completed until 1694, more than 12 years after the death of Ngawang Lobsang Gyatso. 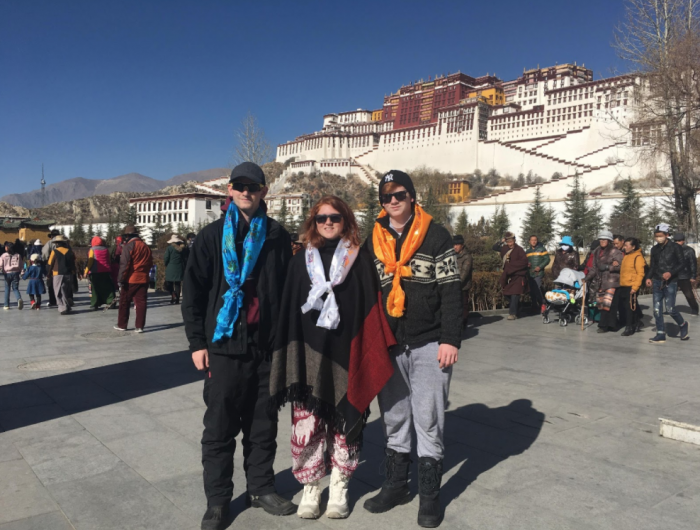 Sitting in the mid-point of the triangle formed by the old city of Lhasa and the Drepung and Sera monasteries, the modern palace lies on the site of an ancient fortress that was reputed to have been built by Songtsen Gampo in around 637. In the northwest corner of the palace, parts of the original 7th century fortress still exist.

Built in the traditional design of Tibetan architecture, the palace walls are more than five meters thick at the base, and taper slightly towards the roofs. The palace stands 117 meters high on the top of the hill, which itself sits more than 300 meters above the city, and contains over 1,000 rooms, 10,000 shrines, and more than 200,000 statues.

The name of the palace comes from the rocky outcrop in southern India known as Mount Potalaka, which is believed to be the mythical home of the bodhisattva Avalokiteśvara. It is also believed that the design of the building was taken from a mountain peak of roughly the same shape in western Tibet, and legend says that lamas were sent out all over Tibet to find a suitable design, and this fortress-like shape was chosen. The palace has been the winter palace of the Dalai Lama since it’s construction was completed.

Tour the Tibetan Monasteries in Lhasa

Lhasa is the spiritual center of Tibetan Buddhism, as well as the political center of Tibet, and that can be seen clearly in the stunning temples and monasteries that lie within its boundaries. The first, and definitely the most important, of these is the sacred Jokhang Temple, a Buddhist temple in Barkhor Square in the center of Lhasa. Jokhang is considered by Tibetans to be the most sacred temple in the world, and it is maintained by the Gelug School of Tibetan Buddhism, although it is open to all schools of Buddhism around the world. 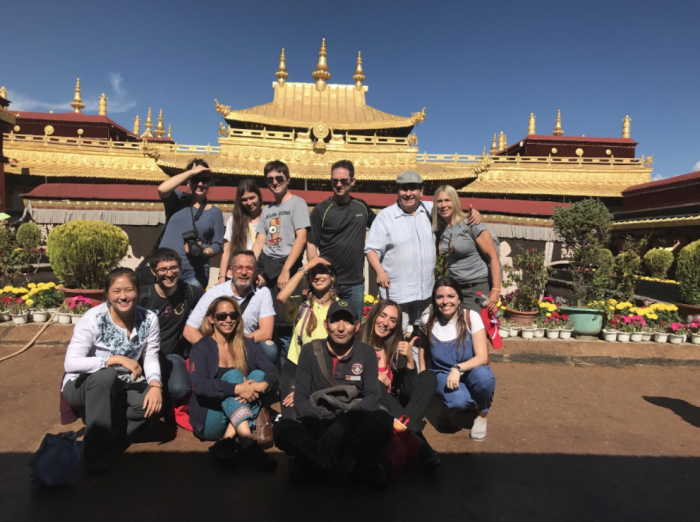 Founded during the reign of Songtsen Gampo, the temple was built for his two brides, Princess Bhrikuti of Nepal and Princess Wencheng of the Chinese Tang Dynasty, both of whom brought statues and images of the Buddha to Tibet, and which are still housed in the temple. On the marriage of Songtsen to Princess Wencheng, an image of the Sakyamuni Buddha as a young man was brought to Tibet, and Songtsen deified the statue in the Jokhang temple, where it has become known as the Jowo Rinpoche, and resides to this day.

The original name of the Jokhang Temple was “Rasa Thrulnag Tsuklakang”, which means House of Mysteries, and it was changed to Jokhang, meaning Temple of the Lord, after the death of King Songtsen.

One of the Great Three monasteries of the Gelug School, Sera Monastery lies two kilometers to the north of the center of Lhasa, and is one of the most important monasteries in Tibet. Founded in 1419 by one of the disciples of Je Tsongkhapa, the monastery is divided into two sectors, with the Great Assembly Hall and the living quarters in the eastern part and the three monastic colleges in the western part. 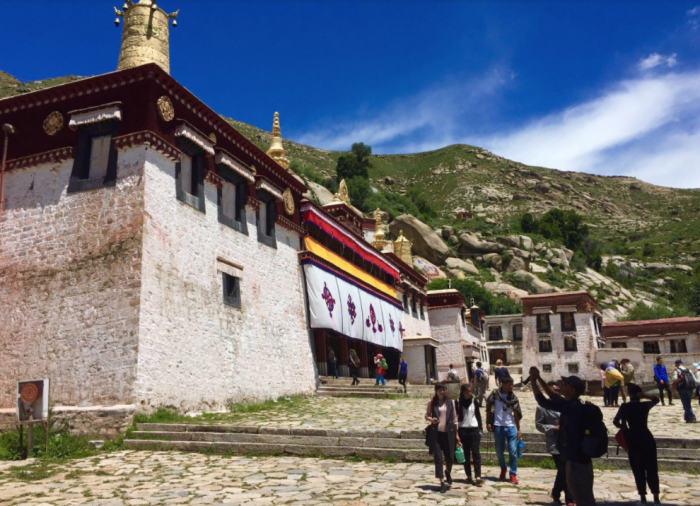 Sera Monastery is one of the few monasteries of Tibet where regular debates are held in the afternoon in the debating field of the monastery. Inside these gardens, monks learn to question and answer the great mysteries of Buddhism, making statements on Buddhist philosophy and theology, and presenting their arguments both for and against. Often pitted against Buddhist Lamas, the young monks debates are filled with exuberant arguments and dramatic gestures, and the scene is one of wonder to watch.

Off to the west of Lhasa, five kilometers from the center of the Old City, lies the second of the Great Three monasteries of the Gelug School. Known as the most important of the Gelug monasteries, Drepung was first established in 1416 by the disciple of Tsongkhapa, who became the first head of the monastery. Well versed in Esoteric and Exoteric Buddhism, and with the support of the rich merchants of Lhasa, the monastery became the richest of its kind in Tibet, and went on to be the Mother Temple of the Dalai Lamas.

The monastery is situated at the foot of Mount Gambo Utse, and was built on a system of caves that were once used as hermitages, with the temples surrounding two beautiful white pagodas. The monastery contains hundreds of cultural relics that date back to the 7th century, and includes the finely carved statues of Tsongkhapa, Manjushri Bodhisattva, and Amitayus. The walls are adorned with murals that represent the combined wisdom of the Tibetan people.

Experience the Local Life in Lhasa

One of the best things about a visit to Lhasa is the people. Tibetans are a devout people, with a strong belief in Buddhism, the nationally recognized religion of the region. Life in Tibet moves at a much slower pace than you will find in most other places in the world, and the laid-back lifestyle of the Tibetan people is often misunderstood.

Tea is a major part of the Tibetan diet, and is drunk in both its local forms almost all day long. A huge part of Tibetan life, tea is also part of Tibetan relaxation, and in the teahouses of Lhasa you can often find people sitting drinking tea and chatting about local events and happenings. Teahouses have become a major part of Tibetan culture over the last few centuries, and are the places to go to hear what is being said on the local grapevine. In the same way that coffee shops have become meeting places for young Americans, so are the teahouses the gathering places of the Tibetan people.

Another activity that you can take part in to learn more about the Tibetan people in Lhasa is the homestay or homevisit. For people who want to learn more about the people, there are many Tibetans who open their homes to foreign visitors, and welcome them in to allow them to experience Tibetan home life in its real state. Not only can you spend time talking with the family and understanding more about the culture, but you will also get the chance to try some real Tibetan home cooking, all interspersed with endless bowls of tea with tsampa.

As night descends on Lhasa, the sights of the Potala Palace lit up by spotlights are some of the most amazing photos you will get in Tibet. The palace at night is a beautiful sight, but taking photos of buildings at night is not the only thing to do in Lhasa when darkness falls.

Believe it or not, Lhasa does have something of a nightlife, with bars, clubs, restaurants, open teahouses, local performances and shows, the famous night markets, and lots of local street foods. Tianhai Night Market is famous for its snacks and covered restaurants, where you can try all kinds of Tibetan and Sichuan cuisine, while the various singing and dancing troupes entertain visitors and locals alike, with short performances of Tibetan Opera.

Bars in Lhasa are not the raucous affairs of the west, and have a unique and exotic flavor. They are a great place for meeting friends, and are popular with the younger generations of Tibetans in Lhasa, for relaxing and chatting or just sitting with a drink while reading. Tibet also has nightclubs, and where better to find yourself on a Saturday night than dancing to some of the regions own pop culture music. And the dancing is often all in step, as everyone knows the dance moves and does them together.

Travel to the Surrounding Attractions

There are many other attractions of the area around Lhasa that can be included on a tour of the city, and some that really should be included as they should not be missed. One of these is lake Namtso, some 112 kilometers north of Lhasa. Lying at an elevation of 4,718 meters, the lake was formed more than 25 million years ago and is the largest lake in the Tibet Autonomous Region. The lake has five small islands, which were once used as spiritual retreats for monks through the summer months. It is also home to many species of wildfowl, such as the Ruddy Shelduck and local cormorants.

Around 40 kilometers northeast of Lhasa lies the third of the Great Three monasteries of the Gelug School, Ganden Monastery. One of the earliest monasteries in Tibet, it is also one of the largest, and was founded in 1409 by the great Tsongkhapa himself. The main dwelling place of the gelug Abbots over the centuries, the monastery contains the tombs of more than ninety of the previous abbots, built into pagodas around the monastery grounds.

If you are traveling north to visit Namtso, then there is no better place to stop on the way back than the famous Yangpachen Hot Springs. a natural geothermal spring, the area is famous for its relaxing and therapeutic hot spring water, which comes from one of the world’s major sources of high-temperature geothermal springs. It is also one of the largest geothermal areas in the world, and hosts the first geothermal power plant in Tibet, which supplied power to nearby Lhasa before the Yamdrok tso Hydro Power Station was completed.

Top 3 things you should do during your Tibet Tour

Important Things to Bring With You When Traveling Abroad

Top 3 things you should do during your Tibet Tour