Discounting the road from Nepal to Lhasa, there are four main routes to take to get to Lhasa by road to start your own Tibet tour. These four roads each cover around 2,000 kilometers from their respective start points across the heights of the Tibetan plateau to get to the Tibetan capital, and each has its own unique features that make it a great route to take. 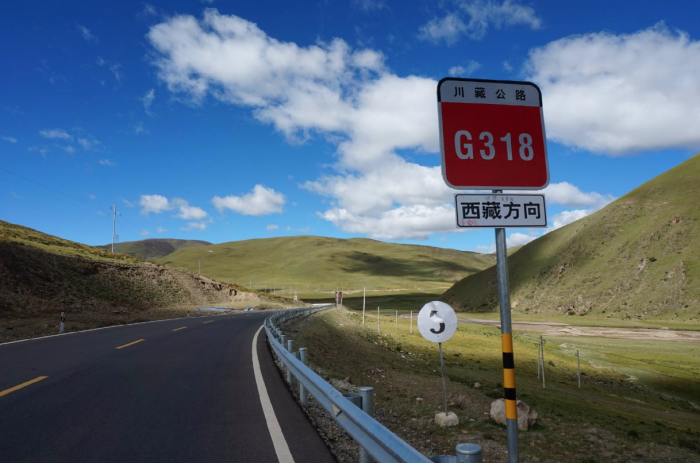 The first route many people take when traveling from mainland China to Tibet these days is the route from Chengdu in Sichuan Province. Known as the Sichuan Tibet Highway, this road actually comprises of two routes to get to Tibet. Starting in Chengdu, the route heads west out of the city towards Kangding, the gateway to the Garze Tibetan Autonomous Prefecture.

Named as one of the most dangerous roads in the world, this has not stopped thousands of people from traveling this route every year, and the road is still used daily by trucks taking goods in and out of the plateau. Dangerous as it may be, it is, without a doubt, one of the most beautiful of all the routes to Tibet, and the change in scenery you will experience traveling from the lowland Chengdu Plain to the heights of the Tibetan plateau is awesome.

The route, for the most part, follows the G318 National Highway, which is one of the longest roads in the world, extending for more than 5,000 kilometers from Shanghai in eastern China to Zhangmu in western Tibet. The road actually divides into two separate routes at Xinduqiao Bridge (the famous spot for photographers) and heads through the Hengduan Mountains along two different roads, the Northern Route and the Southern Route.

The Northern Route follows the G317 National Highway from Chengdu, through Danba, Chamdo, Nagqu, and finally into Lhasa, and covers a distance of 2,412 kilometers. While this is actually regarded as the safer of the two routes from Chengdu to Lhasa, surprisingly, it is the least popular. The Southern Route, however, is the more popular route to take to get to Tibet. Starting in Chengdu, the road heads west through Kangding, Litang, Markam, Bomi, Nyingchi, and finally finishes in Lhasa after covering 2,154 kilometers through high, snow-capped mountains, deep, lush valleys, and over mountain passes where the roads are sometimes little more than a single lane dirt track. 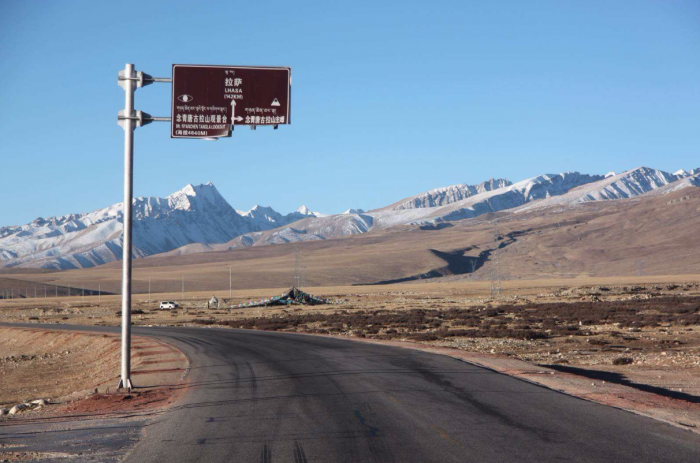 Of all the routes to get to Tibet, the Qinghai Tibet Highway, which runs from Xining in Qinghai Province of China to Lhasa, is the shortest, at just 1,937 kilometers. The first road from mainland China to Tibet, it was opened in 1954, and with some refurbishment work over the years, is now the best of all the routes to Lhasa. traveling at an average altitude of around 4,000 meters above sea level, the road starts in Xining and passes through Golmud, the Kunlun Mountain Pass, the Fenghuoshan Mountain Pass, the Tanggula Mountain Pass, Nagqu, and Damxung on its way to the Tibetan Capital.

The road from Xining crosses some of the most stunning scenery and landscapes in the world, breaching two high mountain ranges and crossing the two hundred and fifty thousand square kilometer expanse of the Changtang Prairie (4,500 meters), which takes up almost one-third of the land area of Tibet. The road also crosses through the Hoh Xil Nature Reserve (4,800 meters), the highest nature reserve in the world and home to the rare and endangered Tibetan Antelope. The nature reserve covers an area of 83,000 square kilometers and is also home to over 2,000 species of animals and birds, including wild yaks, wild donkeys, and the famous white-lipped deer.

It is as the Tanggula Mountain Pass, the highest road pass in the world at 5,231meters, which the road enters the Tibet Autonomous Region, and from there you are treated to the delights of the Tibetan plateau at its best, with high mountains, vast plains, and shimmering holy lakes. From Nagqu, the road and railway lie almost side-by-side for the remainder of the journey to Lhasa, traveling together past the beauty of Lake Namtso and through Damxung County and the Nyenchen Tanglha Mountains, just north of Lhasa itself.

The road from Xining to Lhasa is not only the shortest route, it is the best as well, with asphalt surfacing along its entire length. Resurfaced between 1974 and 1984, the road was given Secondary highway status, making it the premier highway in Tibet at the time. Almost ten meters wide along most of its length, the highway has a maximum driving speed of 60 kilometers per hour. But who needs to race along any faster, with such beautiful views and sights along the side of the route. 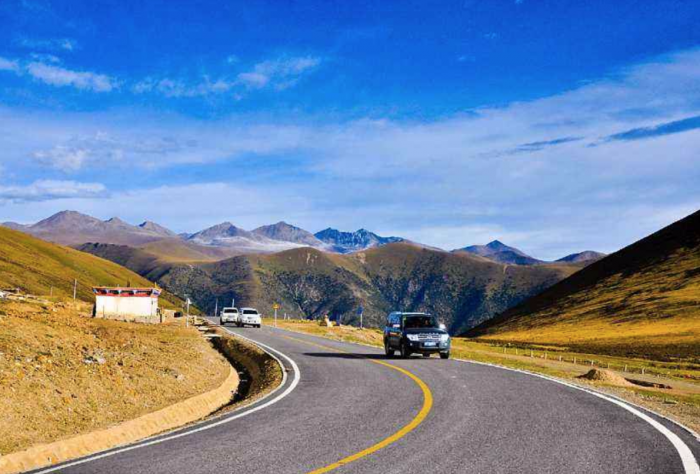 Another important route entering Tibet from Southwest China is the Yunnan Tibet Highway, which runs from Kunming in Yunnan Province to Lhasa. Completed in 1973, the road follows a route between snow mountains and deep, lush valleys, alongside canals and over countless bridges as it makes its way along the 2,225-kilometer route to Tibet. Passing through some of southwest China’s most beautiful mountain landscapes, the road passes through the Cangshan Mountains and the Hengduan Mountains on its journey to Lhasa.

Only around 39 kilometers of the road is actually above 4,000 meters, but it winds up and down the Hengduan Mountains as it makes its way first north then west to get to Tibet. The route from Kunming goes through Dali, Lijiang, Deqen, and Yanjing, before joining the G318 Sichuan Tibet Highway at Markam for the remainder of its route. The road also passes through the famous town of Shangri-La, renamed by the Chinese government to promote tourism in the region.

The stretch of the road that runs from Kunming to Markam is one of the most beautiful stretches of road in China and takes you past some of the amazing sights of Yunnan Province, such as the beautiful Erhai Lake and Cangshan Mountain, which lie together between Kunming and Dali. Further along the route, near Lijiang, you can experience the ancient city of the Naxi people, and follow the Ancient Tea Horse Road alongside the Tiger Leaping Gorge, one of the most turbulent gorges in China, and a great spot for taking in the views.

Shangri-La, renamed for the famous city in the novel, Lost Horizon, by British author James Hilton, is a place of exquisite beauty, and the scenery and Tibetan culture is very reminiscent of the fictional city in the book. It is thought by many scholars that the Shangri-La written about in the book was taken from a real place in ancient Tibet. Once past Shangri-La, you will see the natural wonders of the Pudacuo National Park, and the stunning Meili Snow Mountain.

After the road passes through Markam, it follows the Sichuan Tibet Highway to Lhasa, and the route takes you through Nyingchi Prefecture of Tibet, known as the Switzerland of Tibet for its beautiful alpine scenery, and famous for the Nyingchi Peach Blossom Festival in April.

Kashgar to Lhasa overland trip via 219

One of the most striking overland routes to Lhasa is the road from Kashgar in Xinjiang Uyghur Autonomous Region, which runs for 2,086 kilometers across the Tibetan plateau to the capital city of Lhasa. Xinjiang is another Autonomous Region of China, in the northwest of the country to the north of Tibet and west of Mongolia. Once the route of the most important Silk Road, which ran from the east of the region to its northwest border with Kyrgyzstan, Xinjiang is one of the largest autonomous regions in China. 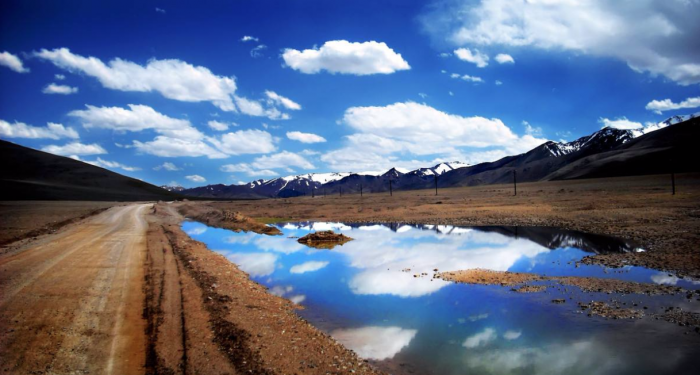 As the largest natural gas-producing region in China, Xinjiang is the home to several ethnic groups, including the Han, Hui, Kyrgyz, Kazakhs, Mongols, Tajiks, Uyghur, and some Russians. A huge expanse of land area, only around nine percent of the total area of Xinjiang is suitable for habitation. One of those places is Kashgar, an oasis city in the region and one of the westernmost of all China’s cities. Once a major trading post along the Silk Road, the city is the administrative center of the Kashgar Prefecture.

The road from Kashgar to Lhasa is the highest road in the world, with an altitude of over 5,000 meters in many places, but it is one of the poorest condition roads in China. Construction began in 1951 and was completed in 1957, with an average elevation of over 4,500 meters. The road climbs over high mountain passes filled with ice, passes almost four dozen glaciers, and climbs up over five mountain peaks on its journey southeast. While it may be the least good condition road of the four, it is undoubtedly the most breathtaking, as it passes through scenery and landscapes that very few western people have ever laid eyes on.

The route heads first south from Kashgar, through Ritu County in Ngari and passes by the regional capital of Ngari, Shiquanhe River Town. From there it can take one of two routes, going east along the S301 highway, through Coqen, Nyima, and Baingoin, and then down past Lake Namtso to Lhasa along the G109 or continue along the G219 past Mount Kailash and through Zhongba, and Saga, before joining the G318 heading east at Lhatse.

Much of the road in the north of Tibet and Xinjiang is at very high altitudes, and the air is thinner with more intense sunlight than in the rest of Tibet. With a harsh climate along more than half of the route, it is a challenging drive for even the most physically fit people and requires care and concentration when driving the route. Most people can adapt to the increased altitude and harsh conditions, however, and it makes the road one of intense beauty as it passes along the route through the most remote areas of Tibet, where even the hardy Tibetan people do not live.

Cycling Guide from Lhasa to Kathmandu