Behind bars: My review of Alcatraz Prison Tours

Are you looking for an in-depth review of Alcatraz, from someone who has actually been there? If so – keep reading.

On our recent trip to San Francisco I knew one of the thing we absolutely had to do – was visit Alcatraz.

But the first bit of advice I’m going to give you (and it’ll save you time, money and tears) is this: YOU HAVE TO BOOK WELL IN ADVANCE.

You can’t just ‘turn up’ for Alcatraz. If you want to ensure you get to go, and you want to pay ‘normal’ prices (and not extortionate third-party, last-minute prices) you need to visit the official website, and try and book tickets at least a month ahead of time. Don’t forget to do this, because if you do you’ll just be disappointed.

But anyway – now onto the good stuff!

The first views you’ll get during your Alcatraz experience are actually from the ferry as you leave mainland San Francisco. Get a good spot stood at the sides of the boat (ignore everyone who sits down… they don’t know what they’re doing). You’ll get some incredible shots of the city, as well as the Bay Bridge and the Golden Gate Bridge too. 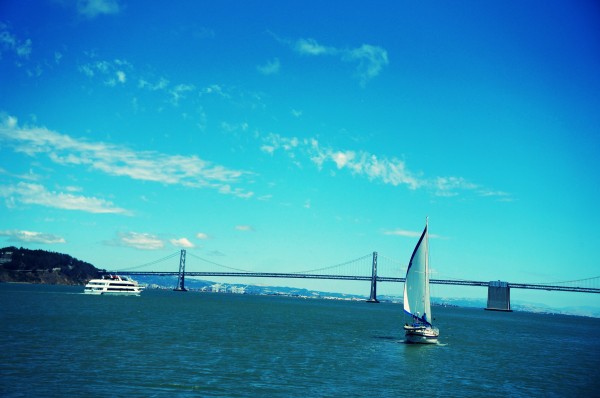 When you first arrive at Alcatraz Island

The first thing you do when you get off the boat (after you take a selfie at the sign!) is listen to a park ranger give a little presentation and intro speech. It’s worth sticking around for this, it only takes 15 minutes.

In these first few shots, you can see me listening to the Park Ranger and familiarising myself with the Alcatraz Prison tour map. There is also the famous Alcatraz sign – definitely a worthy photo-stop.

It’s also worth watching the starter movie (housed in the gift shop halfway up the hill to the prison). Videos aren’t usually my thing, but it was only about 10 minutes long, and it was actually good to get a bit of context about the island before heading out and exploring it. 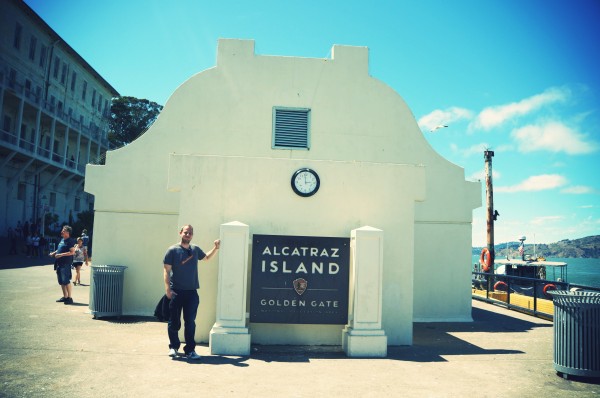 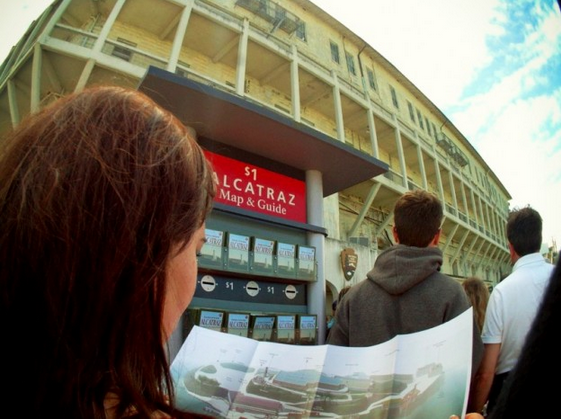 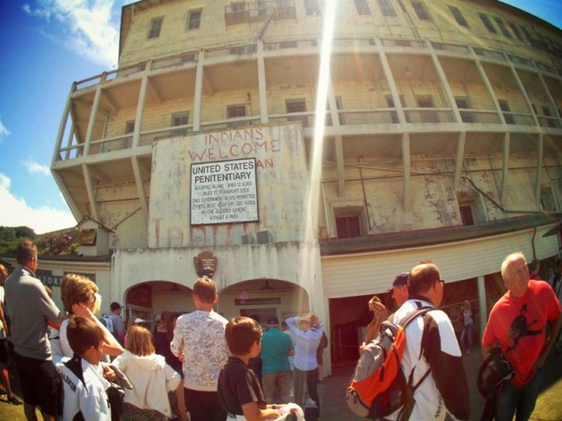 One of the things the Park Ranger told us about the sign you can see in the image above (apparently it’s pretty special) was that it holds all the layers to Alcatraz’s history. Not only does it show proof of the army base, and prison days (which is what you’re probably most familiar with) – but it also has graffiti left by the Indian protestors in the 1970s, along with the National Park signage – which is the status the island holds today. So that’s pretty cool – and something you wouldn’t know if you’d have run off without listening to him.

Now, into the actual prison… 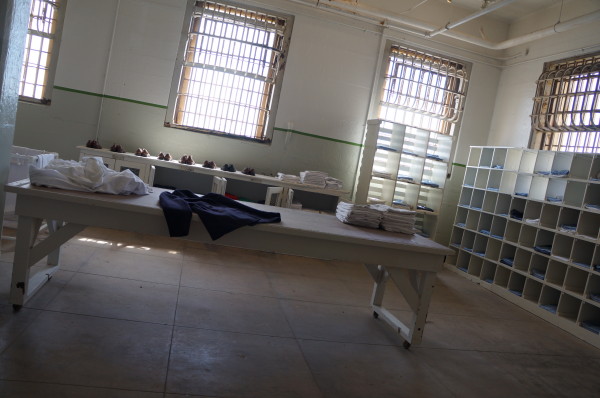 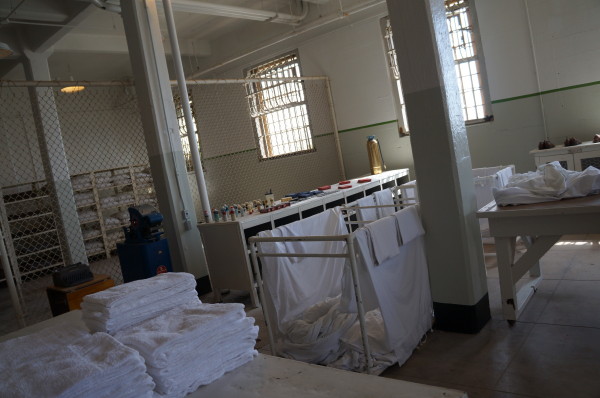 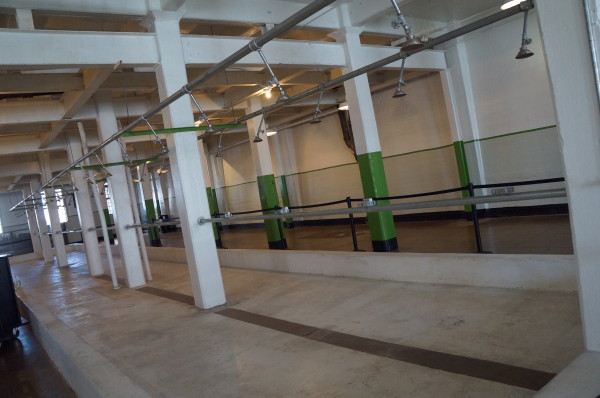 After about a 10 minute walk up the hill to the big prison building (it’s not too steep… so don’t worry) you enter the prison through an unassuming side door. The first room you get to see is actually the rooms where new arriving prisoners would’ve also walked through. You walk along the medical centre, and alongside the showers where prisoners would been hosed down.

Once you’ve been through this area, you get given your audio tour headphones and you’re free to follow it round when you’re ready. It’s kind of exciting to be honest – I’d never done an audio tour before (especially not in a prison) so I couldn’t wait to get going.

Tip: If you’re with someone, make sure you both press play at the same time. otherwise you’ll be walking away from each other throughout the tour! 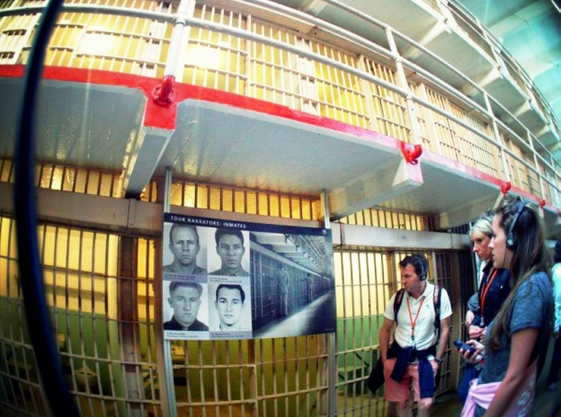 This photo (below) might seem a bit random, but I took it because of how incredibly thick the glass was. It was about 5 inches thick…. 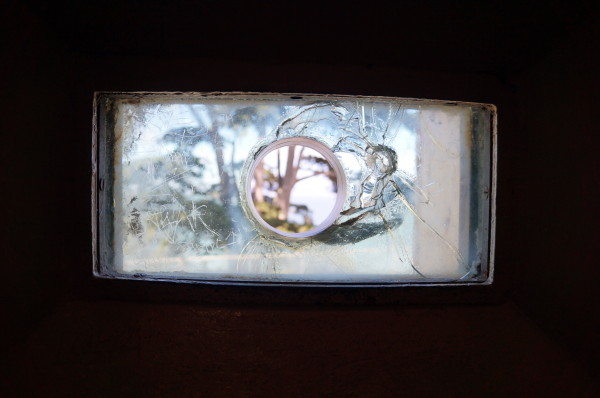 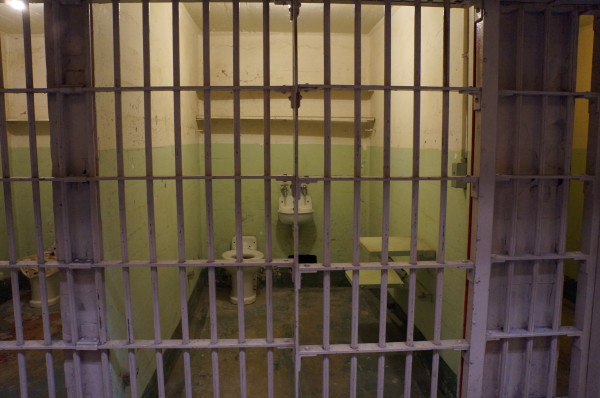 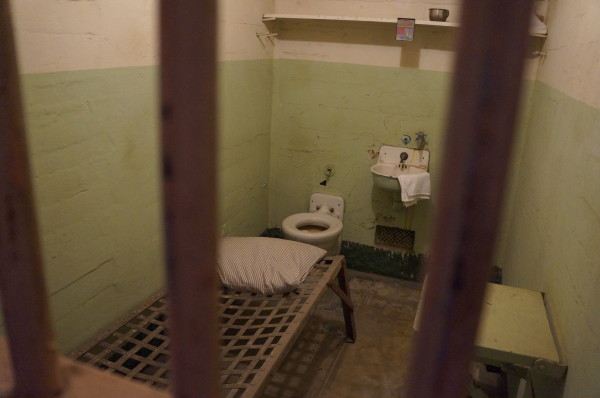 The tour leads you around various parts of the prison, and you listen to stories from both the prisoners and from the guards as you go. They’re real people telling real stories – and it makes for an amazing tour – unlike anything I’ve ever experienced. You almost find yourself lost in the prison, like you’ve been transported back there.

It’s really important to remember when you’re in the prison, that nothing has been changed. It’s exactly how it was – right down to the escape routes and holes in the walls!

My favourite part of the tour

My favourite part of the tour was seeing the outdoor recreation yard. That was so bizarre – so don’t miss the part of the audio tour that takes you out there.

There I was stood in this yard, on the same ground where some of the most dangerous criminals to have ever lived once stood. There I was looking at the same view they did. Hearing the same sounds they had. It was a bit overwhelming to be honest, and a strange thing to get your head around. Pad captured the photos below when I wasn’t aware – and you can see the thoughtfulness in my face. I was absolutely lost in thoughts.

You know what though… the view from that yard was incredible. Maybe one of the best views we saw the entire time we were in San Francisco. It must have been torture to be locked away and have to stare out at such a beautiful city. The phrase ‘so close yet so far’ never rung truer…

Tip: The island is really windy (much more than on the mainland) so make sure you take a jacket or cardigan – and don’t wear a dress that will easily blow up. We got lucky because it was an exceptionally hot day so we didn’t feel the cold too bad, but my dress did blow up! 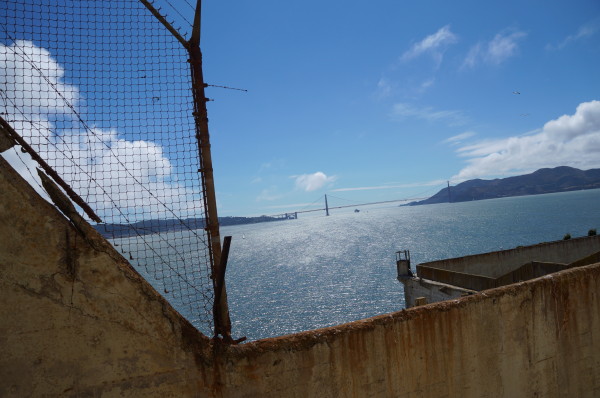 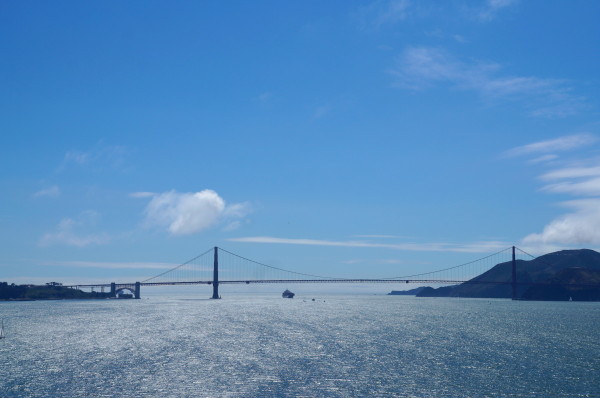 Can you look around the actual prison cells?

Your next stop on the tour is the high security bit of the prison, or ‘solitary’ as they called it.

The tour invites you to step inside the cells (which was awesome and frightening all at once) and listen to the kinds of sounds the prisoners would’ve heard. At one point you listen to a prisoner’s own account of solitary, and how he used to cope with the darkness. It’s incredible to be stood where he stood, whilst he tells you about his own experience. Part of his account was that he’d start at the tiny bit of light was ages, and then suddenly close his eyes. With his eyes closed he’d let the little bit of light remaining turn into shapes, and a TV – and then he’d watch this fake TV in his minds eye.

He describes the experience as ‘tripping’ and as I tried to do what he explained, I couldn’t have agreed more.The solitary cells were darker than dark. It must’ve been a scary place. 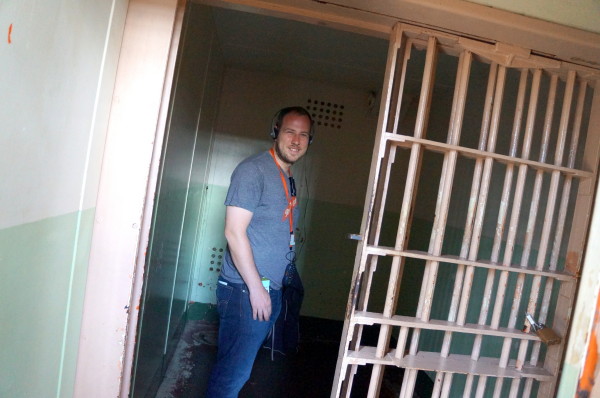 Once you’ve seen the worst of the prison, you then get lead over to what might have been described as ‘the best’. The tour leads you into the staff quarters, and into the generals office. The staff of the island actually lived on the island too – including their  families and children. They show you photos of the children who lived on the island, with narrative from the children (who are now adults) describing how much they loved family life on Alcatraz. 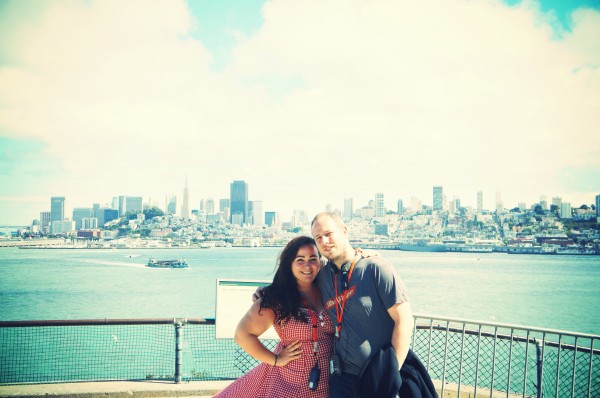 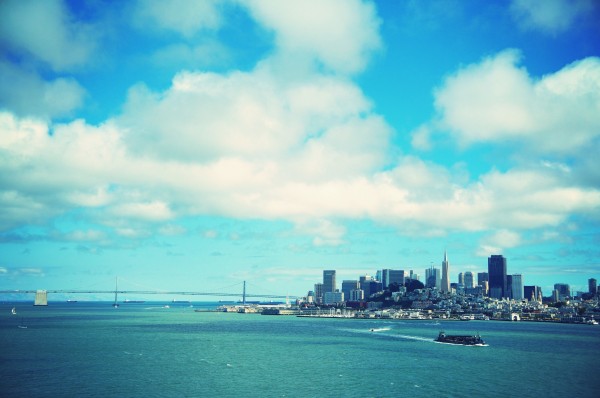 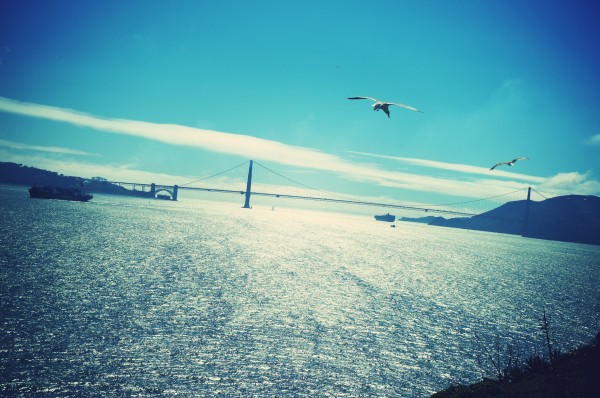 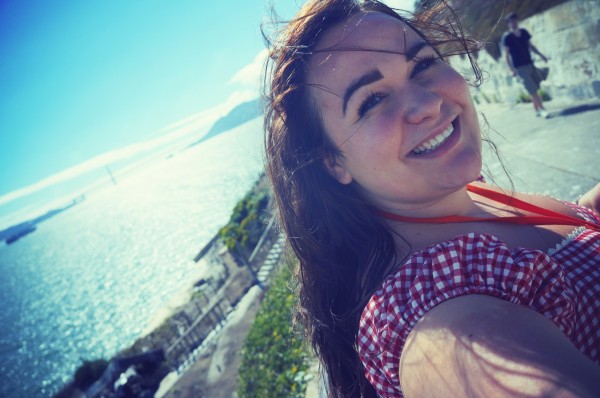 Of course these families didn’t live in the prison – they lived in specially built houses which formed a small neighbourhood on another side of the island. I found this incredible to comprehend.The last stop, is the kitchen and dining room – which is where the tour finishes. Once you’ve had your fill staring through the white metal bars and taking it all in, you can begin the beautiful walk down to the harbour again.

Tip: The boats back to San Francisco leave at set times, so it’s worth snapping a photo of your phone before you head up to the prison of the schedule. That way you can make sure you get down to the harbour in time for a boat. We arrived just as one was leaving, which was a bit annoying – so learn from my mistake!Have you been to Alcatraz? Got any tips or advice? Please share them in the comments below!

20 incredible things to do in Southern California (that you’ll LOVE!)

The Pros and Cons of a Cruise VS All-Inclusive Resorts

Aria Las Vegas Pool: 10 reasons why it’s the best on the Vegas Strip