So, Pad and I were feeling pretty smug after Wellington. We managed to plan our 4 day trip to coinside with the most gorgeous spell of weather, like ever.

This week we headed to Bay of Islands. And had no such luck. 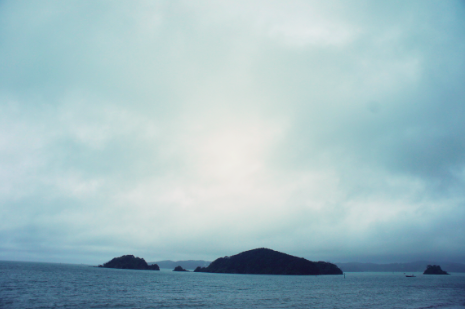 This is the weather that greeted us when we arrived.

Just so you know, The Bay of Islands is known in New Zealand for basically being heaven on earth. It’s got all these amazing little beaches, dolphins and whales in the bay, lots of islands for cruising around and glorious sunshine. How then, was it even possible that we timed our trip for (what can only be described as) a tropical storm. We’re on day 3/6 now (as I’m writing this) and the weather has managed to brighten up a tiny bit finally, but by that I mean we’ve seen the sun today. For maybe 15 minutes? Was pretty sweet though.

Days 1 and 2 were a different story though – I’m talking RAIN. WIND. And surprisingly… HUMIDITY. It did not feel like much of a beach holiday (except for the humidity bit – that was incredibly similar to Thailand). But I guess you don’t win every time. We still had ice-cream, paddled in the sea and saw Dolphins. So it’s not all bad. Tomorrow we’re doing the awesome Rock Cruise, which is an overnight boat tour – and (having checked several websites) it looks like we might, finally, get lucky with weather that isn’t wet.

Paihia is a pretty small (OK, tiny) town. It’s basically made up of one shopping street, a waterside street, and big car park and lots of palm trees and beaches. Which, I should imagine, when the weather is nice – is pretty awesome. It meant that Pad and I had to get inventive about things to do though. Which wasn’t so much a bad thing – if anything it stopped us lounging around on the beach, and forced us to go and explore a little bit more.

Here’s what we found:

The marina area is super small, it consists of a gift shop, a little information centre a restaurant (called 35’ where we had breakfast and were very impressed) and then a little jetty where all the boat tours park and load from. 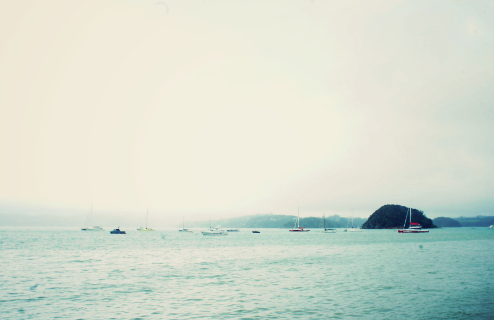 In the summer I bet it’s gorgeous to sit and relax near the waterside  but because of the weather it was a bit wet and windy so we didn’t stick around for long.

This has probably been the highlight of the first half of the trip. There are two companies that do these Dolphin discovery tours in the bay and we decided on the Eco friendly one (I know, we’re so good) and headed off to board the boat. When we arrived though, we were surrounded by school kids, and it didn’t take long to realise – that these kids were going to be joining us on the tour. It then occurred to us that the school trip (about 25 kids!?) were the ONLY people on the boat except us. And suddenly the boat seemed a lot smaller.

Now, I’ve helped out on school trips before (my Mum’s a head teacher) and it’s super fun for about 5 minutes and then you just what to escape from all the noise and screaming. I don’t think a 5 hour dolphin tour with 25+ kids was going to be the relaxing experience we’d hoped for. They weren’t even the “good age” of like 4-8 where they’re still relatively well behaved. These kids were like 11 – 13 years old. PRIME ANNOYING AGE.

We hadn’t even boarded the boat and there was this kid doing dolphin noises. SO HELP ME GOD I WILL PUSH YOU OFF THIS JETTY CHILD. SO BE QUIET.

It was at this point when I realised I had to do something. Anything. So I put on a sad face and looked really disappointed, and the nice man transferred us over to his competitor who was leaving at the same time. I think he felt our pain (after all, he was going to be driving them round for 5 hours).

The new boat only had two kids on (yes!) and the rest of the people (only 9 of them) were couples like us. Which meant we were back on track for a nice afternoon again. Minus the 25+ school children. 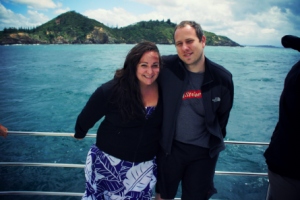 It took us about 2 hours to finally track the dolphins down, it was pretty rough at sea, so I think the must have been harder to trace. Anyway, we finally tracked them down and it was gorgeous. We all got out onto the front of the boat and the dolphins (who were completely wild) were just swimming right along side us, about an arms length away. It was so beautiful, definitely something we’ll try and do again when we’re in Australia. 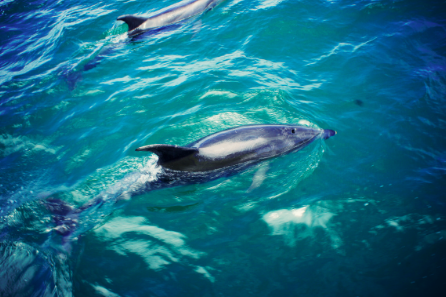 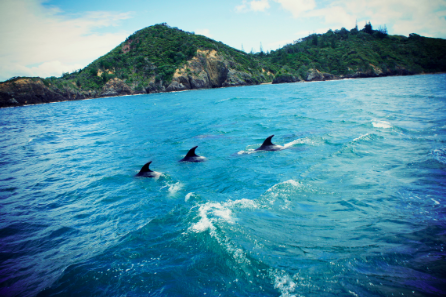 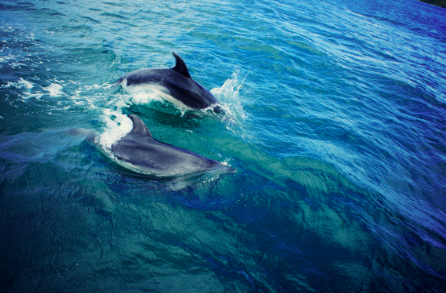 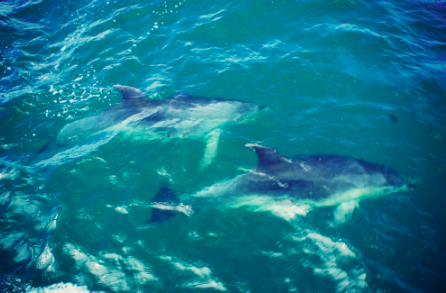 After they’d found us and shown us the dolphins (we spent about an hour or so watching them) we headed off the this tiny remote island for tea and pie. New Zealand makes the best pie – so there definitely weren’t any complain here! 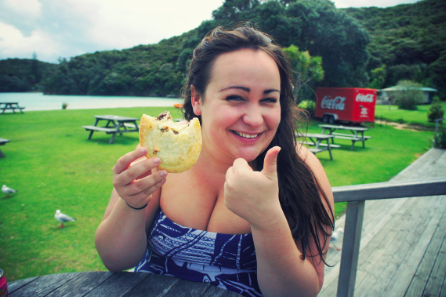 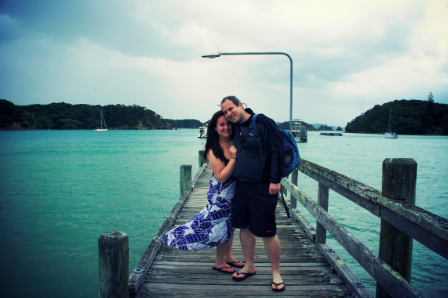 We kind of stumbled upon this place by accident, but it was pretty gorgeous so I’m glad we found it. I think we actually drove the long way round, through this little dirt track  and farm land (much to Pad’s pleasure – who was driving). But we realised the next day we could have actually got there on a mina road, much quicker. Oops.

It’s just a waterfall so you wouldn’t really spend more than 10 minutes here – but still gorgeous all the same. Glad we stumbled upon it. 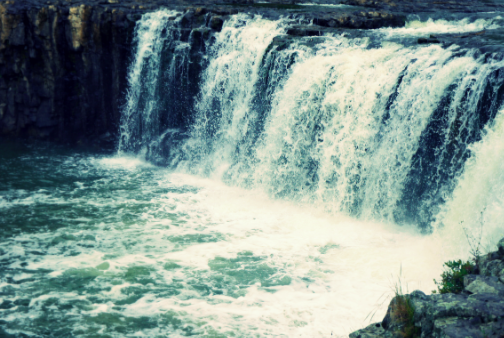 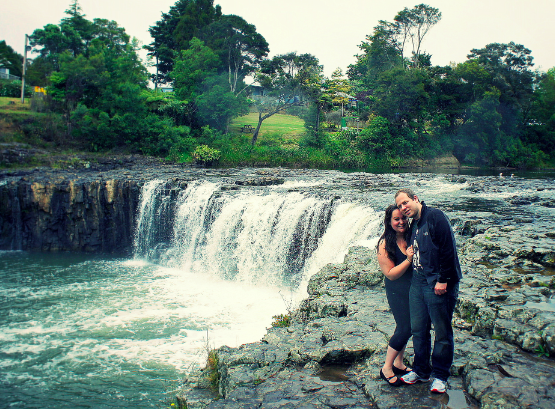 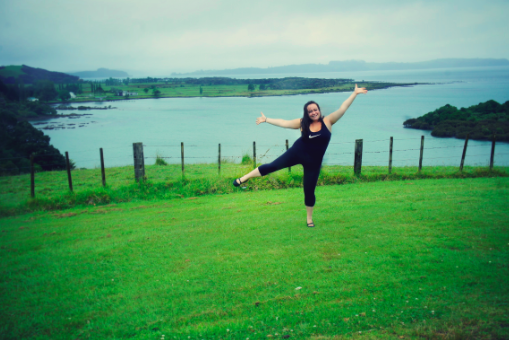 Gorgeous view we found on the way to Haruru falls.

The treaty grounds are where the English original signed a peace treaty with the New Zealand tribes, the Maori. The Maori culture is really treasured in New Zealand – it’s a big part of the country’s heritage and it was really nice to go and see some more of that side of things, and also walk around the protected area too. It’s situated on a little island just off the main town of Paihia – actually the same island our hotel was on. 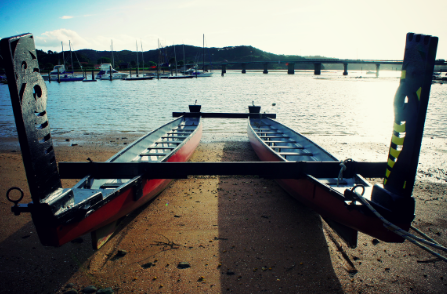 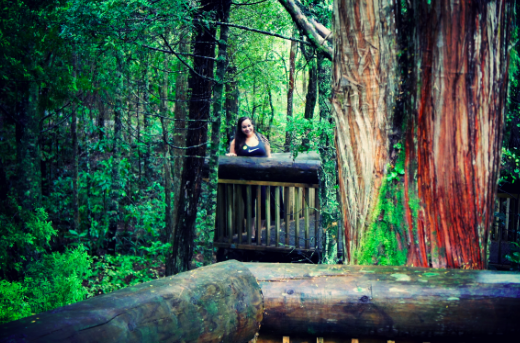 Whilst I really enjoyed seeing all the cultural and historical things they had on display – I was super impressed with the little jungle trail they had – which was this elevated pathway through the jungle area.

Our Amazing New Years Eve in Sydney Harbourlights, at the Botanical Gardens

My favourite ‘cheap eats’ in London

My Favourite Moments from 2013