Are you looking to book a trip to Venice soon? If so, you might be a bit worried about how expensive the city can be, and may be worried about budgeting for your trip.

Venice is an amazing city – but it’s one of those cities that is brushed in confusion and myth. And that’s kind of understandable – Venice is unlike any other city in the world.

Before visiting, I was actually a little worried. Which is unlike me!

To go on holiday.

Why was I worried?

Well, I’d read up on Venice prior to leaving – I always try to read up on a place – and had read all these negative things. Some of these things even made me doubt my decision to visit the city!

I remember thinking, are there too many negatives? Is this city going to be the most over-rated place I’ve been? Maybe I should pick somewhere else!

But I didn’t pick somewhere else, and we visited Venice as planned. And I’m so happy I did. Because it was incredible… and half the negative things I had read were either exaggerated or untrue.

So here are the lies I’d read about Venice:

1. Venice is the most expensive city you’ll ever visit: WRONG

So many travel forums and tour books warned about the price of Venice, and I found myself getting seriously concerned. I was only wanting to visit for a few days… and I didn’t want to get there and risk having a rubbish time because we could afford to do anything, eat anywhere or visit anywhere.

The reality? It wasn’t half as bad as I’d expected.

Maybe it’s because I live in London and I’m used to expensive prices, but I’ve also travelled a lot (and been to many places around the world), and Venice wasn’t too bad at all compared to cities like Melbourne, Sydney, NYC (etc).

I had read, that for a meal out for 2 people in the evening would cost upwards of 100 euros (with most meals coming in at over 140 euros)… but this was way exaggerated.

I never spent more than 30 Euros on an evening meal (and that included a main meal, bread, non-alcoholic drinks, and even a side order in some cases). Granted there would’ve been an extra 10 Euros perhaps if I’d have had a glass of wine with this – but that’s still pretty reasonable.

For 2 people, this would’ve brought the total meal cost to 80 euros.

Remember – people live in Venice too – so the prices won’t be expensive everywhere.

The cost of a bowl of pasta in the average restaurant was like 15-20 Euros, and the price of a pizza ranged from 9 Euros (margarita) to 25 Euros (if you wanted shellfish or prawns or generally expensive stuff on there).

Of course, you’ll pay more if you eat out at the expensive restaurants n the tourist hotspots like Piazza San Marco – and if you choose the luxury restaurants with fine dining – but you’d pay more for that any city in the world.

It’s not just a Venice thing. That’s a hospitality-industry thing.

Overall, the food prices were normal for a touristy city, and there was a good mix of cheap-eats and expensive eats. If you just want to grab a sandwich for lunch for a few Euros – you can! 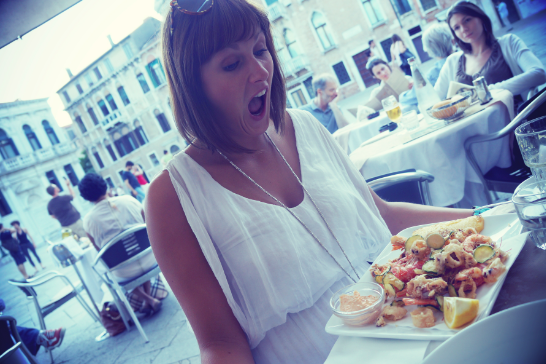 I think Harriet paid around 18 Euros for this massive platter of shellfish. Not so bad after all.

In terms of activities – the prices are pretty normal (and what you’d expect for any city). But also… there are so many free things to do in Venice too!

To be honest, you could spend days just walking around the city enjoying the views and the atmosphere, and not spend a penny on activities!

Before I went I’d read up to be careful about cover charge and tax at restaurants – and that hidden fees were common practise in Venice restaurants.

I’d read couples claiming they’d been charged 30/40 Euros on top of their meal cost, just for sitting down at a table, or eating outside in the courtyard.

WHERE WERE THESE PEOPLE EATING?

Yes – If you go to an expensive restaurant the cover charge will be more (that happens everywhere in the world). That’s also because they know you’re willing to pay it.

Go to normal restaurants and local haunts (away from the big tourist areas) and the cover charge is literally a couple of Euros. We paid no more than 5 Euros in total for tax and cover charge the entire time we were there.

When you think about NYC and other cities in the US where you’re expected to tip up to 20% – this doesn’t seem too bad at all. 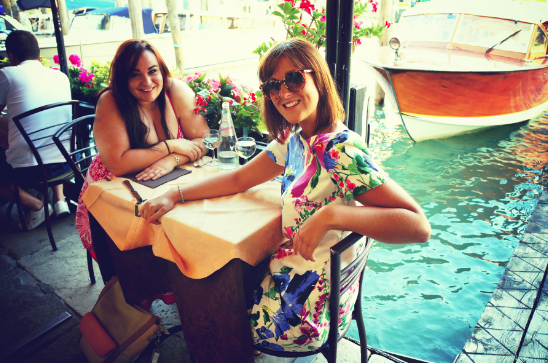 Enjoying a beautiful meal near the Rialto Bridge. Total bill for 2 people: 45 Euros.

OK, so there were times when I noticed a slight smell. But it was a rarity, and not something that hung around my nostrils constantly.

I can only think of one occurrence when it got a bit gross – there was one evening when we were walking down a very scruffy alleyway (way away from the touristy part of the city) and it got a bit smelly. BUT it lasted only a few metres and then it faded.

Maybe it might get worse in the height of summer in August, but I can safely say, that in June when I was there the smell wasn’t noticeable or uncomfortable.

I was dreading the smell (I have an overly sensitive nose) so I was like:

But it honestly wasn’t even noticeable. Sure, you might smell it when you first arrive – but then, just as with anything, it’ll fade away and you’ll get used to. I mean, for heavens sake, people live in Venice – so it can’t be that bad. You wouldn’t voluntarily live in a place that stinks, would you? 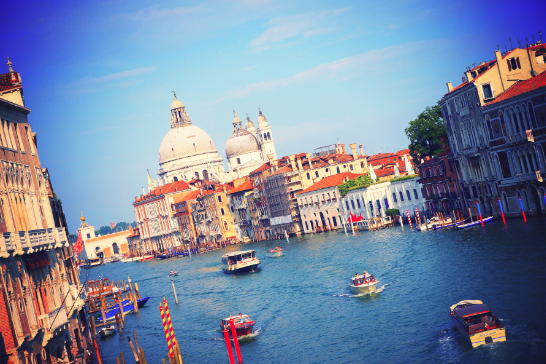 4. Public transport is a nightmare: WRONG

The public transport in Venice is not as bad as I’d read on forums.

It might be a little more confusing initially because you’re riding a boat, not a bus, but it’s pretty easy to get the hang of.

Also, if you’re ever confused – just ask someone. There are plenty of people willing to help, and Italians are very friendly and will happily point you in the right direction.

And if you do get on the wrong boat? Just get off at the next stop and go back in the right direction instead. It’s really that easy. Don’t stress – you’ll be fine. 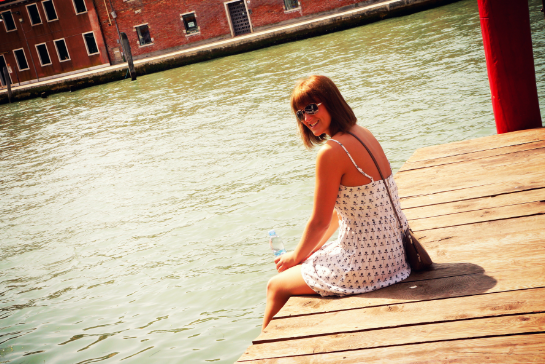 Waiting for our water bus.

All public transport takes a little time getting used to – it doesn’t matter if you’re in NYC, London, Paris, Rome, or Venice – it can be confusing wherever you are.

Take a few minutes to accustom yourself to it – and look out for the major stations such as Rialto Bridge, San Marco, etc – and then at least you’ll know what to look out for and where to aim for.

5. It’ll be swarming with Mozzies: WRONG

I read on a view Trip Advisor forums that the mozzies in Venice are awful because of how much water there is there. I stocked up on DEET, got myself in a fluster (I really hate mozzie bites and seem to react terribly to them) and prepared for the worst.

I didn’t see a single mozzie during my time there. Not in the daytime, not in the evening. AWESOME.

6. Taking a Gondola ride in Venice is over-rated and over-priced: WRONG

I was watching a TV show a few weeks before visiting Venice, that advised people to give the Gondola rides a miss. Claiming they were over-priced and over-rated.

I just don’t understand this at all.

If you’re in Venice, you absolutely must do a Gondola ride. Because it’s iconic, beautiful, romantic, wonderful and a once in a lifetime thing.

Venice is famous for Gondola rides – it’s part of the magic. If you’re going to save up for one activity in the city – this is it.

Yes it’s pretty expensive, but the prices are regulated, and you can choose to share your Gondola ride with other people for cheaper fares – so it doesn’t have to break the bank. So you can save cash, or you can splurge.

Another tip? Daytime rides are less than evening rides, so you can save money there too. You can also book rides in advance too, which can save you cash! 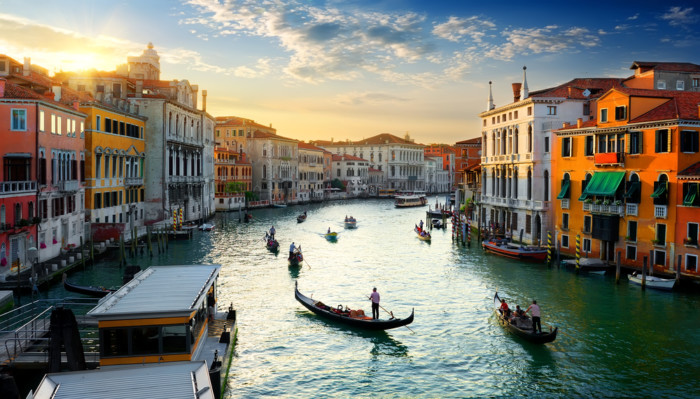 7. The crowds in Venice are crazy: Kinda true, kinda not

OK, so there are crowds in Venice.

It’s a beautiful, popular and small city. So at times, the crowds do get a bit ‘much’. But it wasn’t all the time, and it wasn’t everywhere.

You know in city’s like NYC, you have hubs like Times Square that are busy and crowded? Well, so does Venice. There are parts of the city that just naturally draw more tourists and more footfall than others. You don’t need to spend all your time in these busy places – in fact, you’d be better off exploring the less busy neighborhoods, as they feel more authentic.

So don’t worry too much about crowds. Yes, there will be lots of people in certain places. But lots of Venice is calm, serene, and beautiful without many people at all.

Also (as a quick tip!) if you want to explore the busy places with no crowds, head there early in the morning at sunrise. The city is so calm at that time! 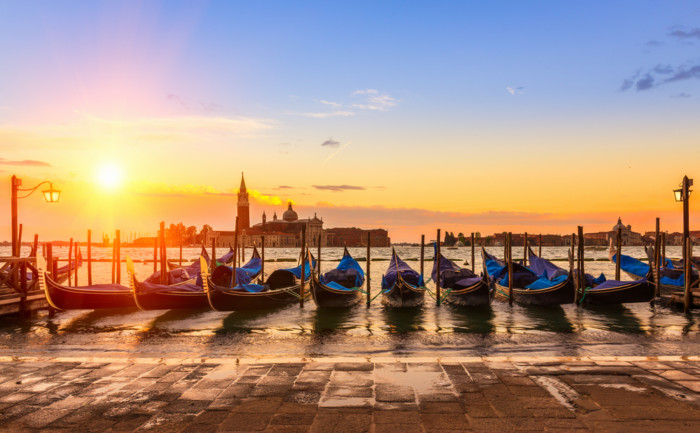 So yeah. Venice is great.

I was worried for no reason, and I loved every second. It’s a beautiful city.

It is a little expensive in parts – but any smart tourist with a brain knows how to avoid those areas, and knows how to avoid paying 18 Euros for coffee. It can be done on a budget – I even came home with 40 Euros left over (which was about 20% of the total cash I took with me). Not bad going! 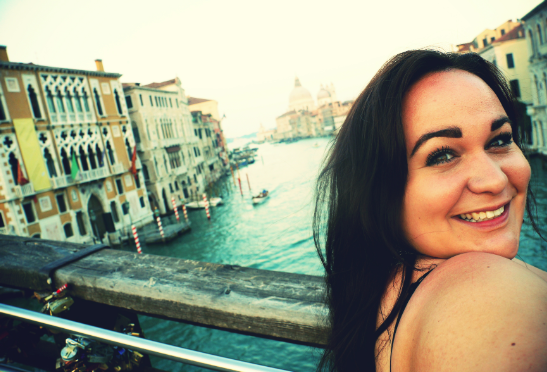 If you’re booking your trip soon, I’d recommend the following website for great deals and prices on tickets and tours…

Is Venice expensive? Everything you need to know about visiting Venice on a budget.

5 free things to do in Venice, Italy

5 Unexpected Cities You Must See in the US